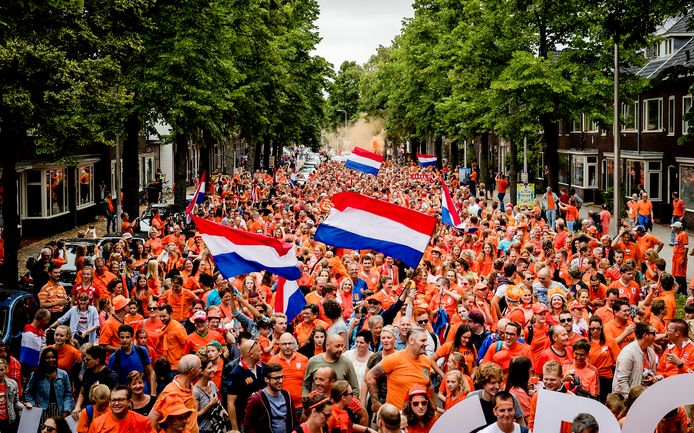 The Dutch have some lovely traditions to celebrate the arrival of a new baby. One time I was in a jewellery shop being served and the owner presented me with a small plate with a large round thick cracker, covered with blue sprinkles. I had no idea what was going on, until my husband said that their colleague had just had a child, and this was the tradition. It’s called beschuit met muisjes (biscuit with mice), and has pink or blue sprinkles depending on, well you can guess. These are served to the first visitors when a new baby is born. On our walks round our neighbourhood, sometimes there are large signs in the front gardens of houses, or in the windows, announcing the birth of a new baby. Usually the name, and maybe a picture of a stork, make up the display.

This signage continues for regular birthdays. The Dutch have no issue with having big banners in front of their houses, announcing the birthday of the inhabitant. Last year my husband turned 50, and I discovered just in time the tradition that when you turn 50 you’re said to have met ‘Abraham’ if you’re a man, or ‘Sarah’ if you’re a woman. This is based on the Biblical reference John 8: 56-57. So, it’s not uncommon to see a giant inflatable cartoon style Abraham in someone’s garden. I was a little nervous about going all out for my husband’s birthday, having not actually seen anything similar at that point, so I opted to play safe and just make a banner. I enlisted the help of two of my new nieces, we wrote a little poem, and surprised my husband on his big day. It brought a few congratulations and smiles from neighbours and passers-by. It said: ‘je kunt het niet aan hem zien maar onze Valentin is vandaag vijf x tien’.

When it comes to regular birthdays, I had been very confused by the limited amount of birthday cards in the shops. Apparently, the Dutch don’t give birthday cards generally, only when they’re not actually going to see the birthday boy or girl. So, turning up at a party with a gift but no card is just fine. I was equally flummoxed when Valentine’s Day rolled around. I’m used to this being a full-on commercial event with the shops reminding us weeks before with arrays of pink and red gifts stocked on shelves every time you go to the supermarket. Valentine’s Day isn’t such a big deal here, and I even struggled to find a card in a card-shop.

It was a huge surprise to me that the Dutch cannot get married in Church. It is purely a legal contract, and is done at a town hall, by a civic representative. There can be no hymns or prayers said. Of course, there are hotels and other venues you can pay to host your wedding, just not in a Church. A lot of people, however, opt to have a church blessing after their civic ceremony. That said, my sister-in-law’s wedding (trouwerij) last December was a wonderful affair, with words spoken by the ‘trouwambtenaar’ (marriage officer) and talks from chosen family and friends.

Of course, the Dutch have celebrations we don’t have. Kings Day (Koningsdag) is a big thing, which sadly was cancelled last year and this due to the Corona outbreak, although I was here for a visit the year before so caught glimpses of everyone in their orange costumes, and I look forward to when I can experience the ‘vrijmarkt’ or ‘pavement sales’ that take place, where anyone can sell anything (books, games usually) on the pavement in front of their houses, a bit like a giant communal garage sale.

Flags are a big thing, and most houses have a flag-pole. Flags are hung on Kings Day and Liberation Day (Bevrijdingsdag). The flag-poles are also used for graduation – a student finishing school hangs his books and school bag on the pole or out of a window to signify that they have finished.

The Dutch remember all who have died in war situations since the 2nd World War on Memorial Day (Dodenherdenking) which is commemorated on the 4th May – with 2 minutes silence at 8pm in the evening. The 5th May is Liberation Day for the whole of the Netherlands, to celebrate the end of the German occupation. These days aren’t bank holidays but flags will fly and schools will teach about it. Military parades with veterans will take place. In the south of Netherlands, where we live, a sort of Liberation Day is celebrated in September as that’s when the southern part of the Netherlands was liberated during Market Garden. I was lucky enough to be here in 2019 for the 75th anniversary celebrations and saw an array of tanks and other military vehicles descend on the City in an impressive parade. There were many veterans taking part and the whole experience was very moving. To see all the people out in the streets, paying their respects to those that liberated them from Nazi occupation.

Carnaval takes place 40 days before Easter, and originated from a Catholic feast dating back to the Middle Ages, when fasting began before Easter, much like the British pancake day. That is where the similarity begins and ends, however. Carnaval has become an all-out party, where people dress up, drink beer and sing silly songs, like ‘er staat en paard in de gang’ (there’s a horse in the hallway). This goes on for a long weekend, and the fancy dress shops are busy providing people with different outfits for a weekend of partying. Carnaval is only celebrated ‘under the rivers’ in the south, as the Protestant north frown upon such festivities (although people travel down to join in the fun – which is what led to the Netherlands first spread in corona transmissions last year).

Christmas is a bit different, and again not such a big thing here. Presents are traditionally given on Sinterklaas, which is on the 5th December, and Sinterklaas is like a Father Christmas equivalent, arriving instead by boat from Spain with his helper, Zwarte Piet. The Dutch refer to what us Brit’s know as Boxing Day as ‘Second’ Christmas Day, but, unlike the British, they don’t get the bank holidays carried over if these days fall on the weekend. This is a travesty in my opinion!

Whereas Christmas in the UK is characterized by turkey and trimmings, there is no set meal here. Of course, I have introduced my traditional Christmas dinner into our Dutch life, although we nearly ran into difficulty my first Christmas here when the turkey we’d pre-ordered didn’t materialize. Clearly something was lost, not just in translation, but in custom – when the Turkish wholesale butchers we’d ordered it from, offered us two chickens instead, or suggested we come back the next day (which was Christmas Day). This was nearly the scene of my first ‘new-country culture shock’ meltdown. I’m sure a semi-hysterical woman having a rant in English did nothing to help proceedings. We drove to a regular butchers’ shop who had one last (enormous) turkey in the window which we promptly purchased and our Christmas was saved.

Hi, I’m Rachel. Here’s 5 things about me: 1. I enjoy writing as a way of connecting and sharing with others and as well as writing on here I write regularly on my business blog and on LinkedIn 2. I worked for 25 years in corporate learning & development and started my own business 2 years ago www.talentstorm.co.uk 3. I love drama (being on stage as well as watching!) 4. I have 3 children – 2 have flown the nest so just one at home now! 5. I’ve just emigrated from the UK to the Netherlands – it’s a bit like learning to walk all over again! View all posts by tallrachel

2 thoughts on “Flags and ‘feestdagen’ – how the Dutch celebrate life”